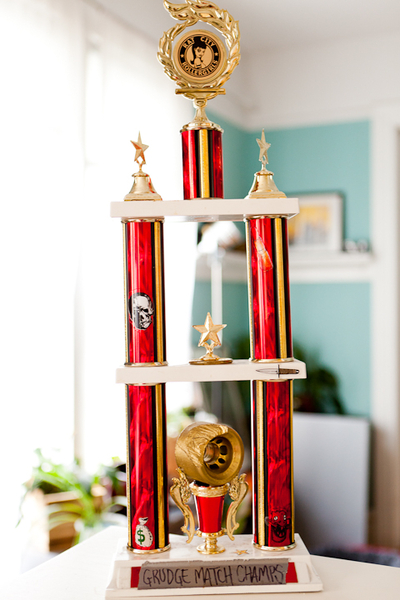 For the past year, my ladyfriend has been the captain of Derby Liberation Front, one of the teams in the Rat City Rollergirls league.  Derby has been a large part of her life long before I met her (she was one of the founders!) and when we met over two years ago, I learned quickly what the term “derby widow” meant.  For years, DLF has been both the fan favorite, as well as the league champions.  Starting out small, playing at local rinks, they quickly grew into a sport taken very seriously by its fans, outgrowing each venue at which bouts were held.  A few years back, the decision for the league to move their bouts to the Key Arena (and selling out!) was a difficult decision for many on DLF, which ultimately meant that some of their best players soon retired.  With the change in roster, DLF went from first to last and saw a major shift in morale and attitude, which is when Meredith (aka Kitty Kamikaze) stepped in as a captain to help.  She provided history, motivation, leadership, and handled some difficult decisions that definitely had her coming home in tears because it was such at challenge at times.
Last night though, after a lot of hard work by all the members on the team, and I mean a LOT of hard work, they finally saw the reward.  Not first… but not last.  They won a very important game as a new and improved team.

I am very proud of my partner and her dedication to her team, to herself, and to the fans of this incredible sport.  Congrats DLF!